The systems of Norwegian aluminum manufacturing company Norsk Hydro were reportedly struck last Tuesday, March 19, by LockerGoga ransomware. In a statement posted on their Facebook page, Norsk Hydro noted their “lack of ability to connect to the production systems causing production challenges and temporary stoppage at several plants.” The other plants, which had to be kept running, were forced to switch to manual operations.

Here’s what you need to know about the LockerGoga ransomware:

Is LockerGoga a new ransomware family?

LockerGoga first made the news in January this year after it was reportedly used on an attack on Altran Technologies, an engineering consultancy company based in France. According to the company’s press release, Altran Technologies shut down its IT networks and all applications to mitigate the threat. It also affected its operations in some countries in Europe.

What happens once LockerGoga infects a system?

Once installed, LockerGoga modifies the user accounts in the infected system by changing their passwords. It also tries to log off users logged in to the system. It would then relocate itself into a temp folder then rename itself using the command line (cmd). The command-line parameter used does not contain the file paths of the files targeted for encryption.

LockerGoga encrypts files stored on systems such as desktops, laptops, and servers. Each time LockerGoga encrypts a file, a registry key (HKEY_CURRENT_USER\SOFTWARE\Microsoft\RestartManager\Session00{01-20}) is modified. After the encryption process, LockerGoga leaves a ransom note in a text file (README_LOCKED.txt) in the desktop folder. 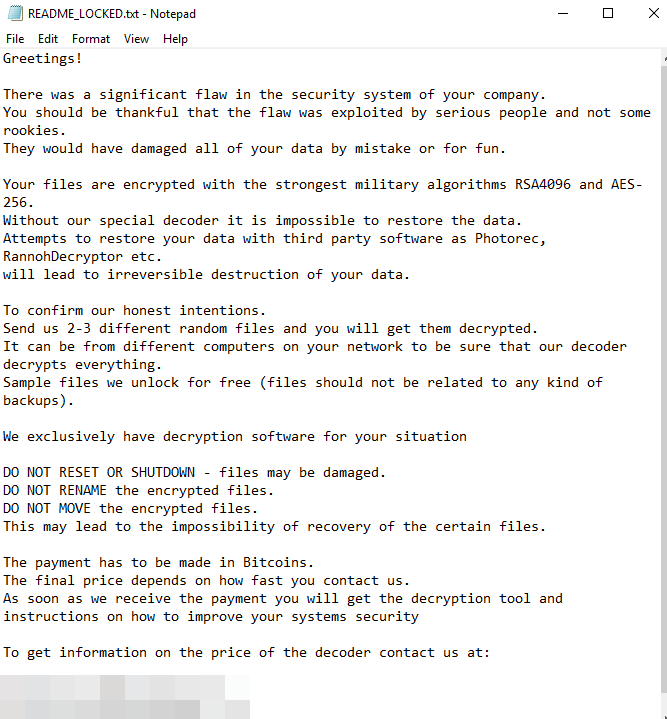 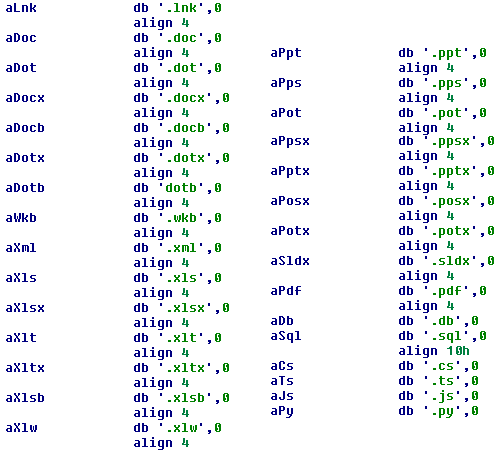 Initial analysis showed that LockerGoga, by itself, doesn’t appear to have the capability to propagate like WannaCry or Petya/NotPetya.

Static analysis also revealed that LockerGoga enumerates the infected system’s Wi-Fi and/or Ethernet network adapters. It will then attempt to disable them through the CreateProcessWfunction via command line (netsh.exe interface set interface DISABLE) to disconnect the system from any outside connection. LockerGoga runs this routine after its encryption process but before it logs out the current account. This is a notable behavior. Its file encryption routine could be considered less consequential since LockerGoga already locks the user out of the system by changing the accounts’ passwords. 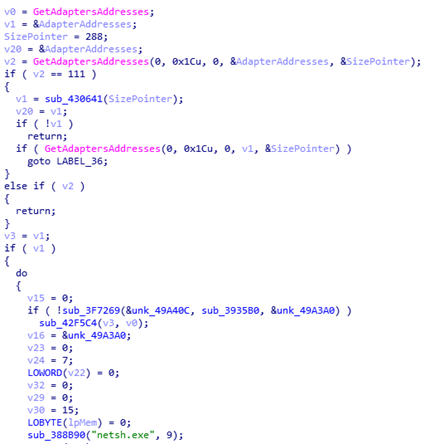 LockerGoga’s code is digitally signed using various valid certificates — Alisa Ltd., Kitty’s Ltd., and Mikl Limited. These certificates have since been revoked. Using a valid certificate could let the ransomware into the system. LockerGoga doesn’t have network traffic, which can let it sidestep network-based defenses.

LockerGoga also has routines that can evade sandboxes and virtual machines (VMs). The main process thread for some of LockerGoga’s variants, for example, sleeps over 100 times before it executes. This is a technique used by various ransomware families and other threats, such as those used in targeted attacks. There are also some variants of LockerGoga that evade machine learning-based detection engines. We are still verifying these anti-sandbox and anti-machine learning capabilities in particular variants. This tactic isn’t new: some Cerber ransomware variants, for instance, are known to have similar techniques.

What file types does LockerGoga encrypt?

LockerGoga’s encryption process is instance-based, which is unusual compared to most ransomware families. This means that the ransomware spawns one process for each file that it encrypts. Some variants, however, encrypt more than one file per spawned process. LockerGoga encrypts documents and PDFs, spreadsheets and PowerPoint files, database files, and videos, as well as JavaScript and Python files. Here are some of the file extensions that LockerGoga targets to encrypt: .doc, .dot, .docx, .docb, .dotx, .wkb, .xlm, .xml, .xls, .xlsx, .xlt, .xltx, .xlsb, .xlw, .ppt, .pps, .pot, .ppsx, .pptx, .posx, .potx, .sldx, .pdf, .db, .sql, .cs, .ts, .js, .py.

Some of the variants of LockerGoga have certain parameters that include, but are not limited to: Encrypting a specific file, erasing a file, the email used in the ransom note, and even encryption of all file types.

Is LockerGoga a targeted ransomware attack?

There are no clear-cut indications that LockerGoga was used as part of an actual targeted attack, unlike the way attackers likely used Ryuk ransomware. On the other hand, LockerGoga could be used and deployed to attack systems of certain targets, similar to the way HDDCryptor, Erebus Linux ransomware, and Crysis were used. LockerGoga, for instance, neither has network and command-and-control (C&C) activities nor relies on a C&C server to generate encryption keys, both of which are typical in cybercrime-driven ransomware attacks.

Does LockerGoga have any connection to the Ryuk ransomware?

While both ransomware families could be said to have been used against specific targets, LockerGoga doesn’t appear to have direct links to the Ryuk ransomware. For example, LockerGoga lacks certain routines that Ryuk has, such as network propagation and information theft. Here’s a comparison between LockerGoga and Ryuk:

How can users and businesses defend against LockerGoga?

Here are some of the best practices against ransomware like LockerGoga:

To read the original article;https://www.trendmicro.com/vinfo/us/security/news/cyber-attacks/what-you-need-to-know-about-the-lockergoga-ransomware/?utm_source=trendmicroresearch&utm_medium=smk&utm_campaign=2019-lockergoga-ransoware