A local police department in the U.S. are warning of a wave of phishing scams targeting users Venmo mobile payment service with text messages that direct to a fake website.

Owned by PayPal, Venmo is a peer-to-peer payment app that allows sending and receiving money to and from contacts on your phone.

Crooks use text messages to deliver links to a fake website that collects personal and banking information. The message informs the potential victim that their Venmo account will be charged unless they decline the operation. Phishing over SMS messages is also known as smishing.

The link to the Venmo phishing page is conveniently delivered in the text offering a quick way get into the account, Dighton Police Department in Massachusetts warns.

Even if the credentials are incorrect, the fake login process continues to a step where users are asked to verify themselves by typing in the number for the payment card along with additional personal and financial information.

A post on Facebook from Dighton PD says that the fraudulent page “uses the same colors and fonts as the Venmo app,” to avoid raising any suspicions. 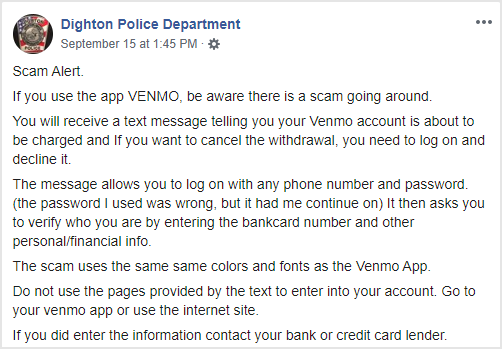 This is a simple form of scam that users may recognize once they are asked sensitive information. A more elaborate version exists where the victim receives a large amount of money from someone they don’t know.

At a later time, the crook asks the money back from the victim. If the victim accepted the initial transaction and then complies to the request believing it was done by mistake, the crook can contact Venmo and have the transaction reversed.

One user reportedly received $1,000 this way, another one claims they were sent $1,200. The large sums are likely intentional, to tempt the recipient into accepting the transaction.

With the first amount returned by the victim and Venmo then taking action to repair a mistake, the crook doubles the money. It’s important to note that money could also come from fraudulent transactions, and Venmo will revert these as well.

In such cases, the best course is not to accept into your account money from people you don’t know and just leave it in the Venmo balance. This way, Venmo can return it to the rightful owner, or at least the source it came from.

According to PayPal’s financial report for Q1, the number of Venmo users has grown to 40 million.

On Google Play, the app has been installed more than 10 million times and its iOS version has a rating of 4.9 out of 5 in the App Store, an average compiled from 6.5 million ratings.