The #FifthOfNovember has arrived, the Italian branch of Anonymous and LulzSecITA hacked websites of professional orders, prefecture of Naples, and also the telephone operator Lyca Mobile.

The Million Mask March, also known as “Operation Vendetta” is a worldwide, annual protest associated with the hacktivist group Anonymous occurring annually on Guy Fawkes Day, the 5th of November. The motivations for the protests vary, they include corruption in politics, demilitarization, police violence, and environmental activism.

Italian hacktivists claim to have hacked the Chamber of Deputies, the prefecture of Naples, the order of the lawyers of Arezzo, Grosseto and Perugia, the Environment Agency in the Abruzzo and Puglia regions and many other sites.

The popular group of Italian hacktivists LulzSecITA also joined the protest and hacked the Italian site of the telephone company Lyca Mobile. 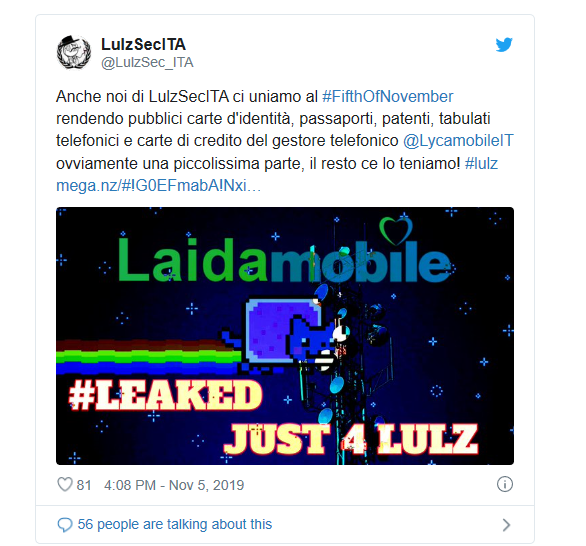 It seems that the hacktivists have stolen 5,4 Gigabytes of documents, at the time there is no info about the authenticity of the documents.

The content of one of the folders leaked by the hacktivists appears to belong to the email account of a company’s official, lycamobile[at]lycamobile[.]it. According to the experts the hackers may have had the complete control of the account, but fortunately, their intent was to demonstrate the hack of security instead of defrauding users.

“Our data breaches should make you think about how important is what we do because the dumps we are disseminating directly affect your privacy, and at the same time we show you the incapacity of those who have taken responsibility for protecting your privacy, and that doesn’t respect the laws that they have created” reads the message of Anonymous Italia.