Several e-commerce sites were targeted with a card skimming campaign that used the Salesforce-owned Heroku cloud platform to host skimmer infrastructure and stolen credit card data, according to a new report from the security firm Malwarebytes.

It appears that members of Magecart were using Heroku, according to a Wednesday blog post by Jérôme Segura, Malwarebytes’ director of threat intelligence. Over the last 18 months, Magecart – an umbrella organization comprising several groups, has attacked the e-commerce check-out sites of several major companies, including British Airways, Ticketmaster and Newegg

Over the past year, security firm RiskIQ has detected Magecart-linked code over 2 million times and over 18,000 domains have been breached as a result.

Although the researcher is unsure when the campaign began or the extent of the attack, Segura notes that several Heroku-hosted skimmers were detected in the past week. Heroku took down all the malicious installations after being notified by the Malwarebytes, Segura says.

“Threat actors are leveraging the service not only to host their skimmer infrastructure, but also to collect stolen credit card data,” Segura notes in the blog. “All instances of abuse found have already been reported to Heroku and taken down.” 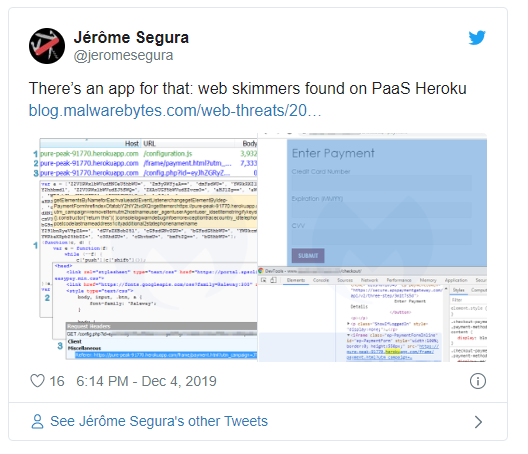 In the latest Magecart campaign, according to Segura, the websites were targeted by the skimming app by injecting JavaScript code for detecting the check-out and payment URLs of the affected websites.

Next, the app injected an iFrame identical to the legitimate payment gateway, thus tricking its users to enter the payment card data, the researchers add.

Once the data has been harvested, the attackers then sent the exfiltrated data in an encrypted format to the Magecart skimmer web app for storage in Heroku, Segura notes.

“Finally, the stolen data is exfiltrated, after which victims will receive an error message instructing them to reload the page,” the researcher says in his blog. “This may be because the form needs to be repopulated properly, without the iframe this time.”

Magecart’s use of iFrame is a relatively new skimming tactic.

In that case, the attackers infected an e-commerce site with code that caused it to pop up a malicious iFrame at payment time.