Trickbot is a well-known, modular credential stealer first discovered in 2016. It has been thought to be a descendent of another well-known credential stealer called Dyreza, or Dyre, due to similarities in functionalities and codebase. Due to its modularity, operators of Trickbot are able to gain access to different functions and capabilities by retrieving additional modules from the command and control (C2) servers. These include capabilities such as a worming function (i.e. copying itself to other devices), email inbox parser, and network reconnaissance.

Generally, Trickbot and similar tools have been largely associated with using malspam with malicious document attachments as the delivery mechanism of choice by their operators likely due to ease-of-use, relatively low resource cost, and high success rates. In this campaign, instead of solely relying on email attachments, the adversaries included links to what appeared to be a legitimate Google Docs document which itself contained links to malicious files hosted on Google Drive. To further obfuscate the malicious activity, the adversaries leveraged a legitimate Email Delivery Service (EDS) called SendGrid to distribute the initial emails, and also hide the Google Drive links in the documents behind a SendGrid URL.

Once the user is fully redirected to the file hosted on Google Drive, an executable file is downloaded. This executable is a downloader tool designed to retrieve a Trickbot payload. Similar behavior was observed in August 2019 by Cofense.

The emails sent by the attackers appeared to originate from individuals at .edu email addresses which were likely compromised by the adversary. They then used SendGrid’s EDS to distribute the actual emails. This would have increased their likelihood of bypassing email filters, as it is a popular service used by organizations around the world. The body of the emails contained lure text consistent with the subject lines and links that utilized a SendGrid function called Click Tracking which sends a notification back to the sender of the email for tracking purposes. The following screenshots show a sampling of the emails received: 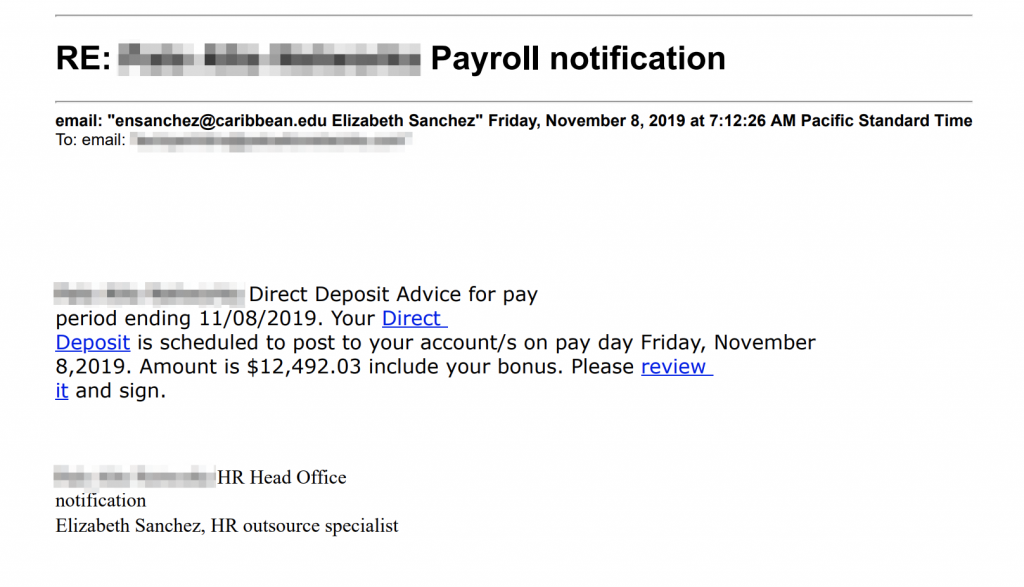 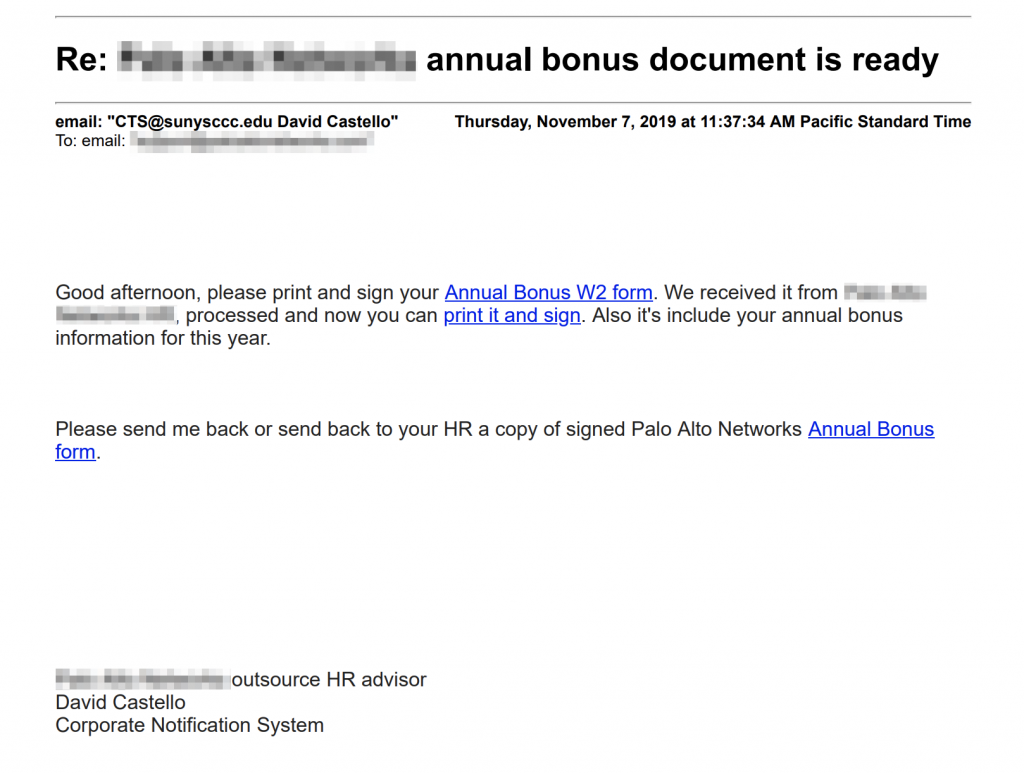 Once the victim clicks on the links, they are redirected to a Google Doc document which has a link to a file hosted on Google Drive. This file is a simple downloader which has a single function of retrieving the Trickbot payload then executing it on the victim host. The attack flow can be seen in Figure 2.

In this campaign, we identified two downloaders:

Both of these downloaders are signed by PERISMOUNT LIMITED and appear as Microsoft Word documents to Windows users, as shown in Figure 3. Due to default settings in most Windows deployments of not displaying file extensions, these files will not appear as obvious executables to a victim. Once these files are executed by the victim, a decoy pop-up is displayed to reduce suspicion of any malicious behavior. Regardless of whether or not the user hits “OK” or closes the pop-up window, the file will still proceed with the download and installation of the Trickbot payload. The payload in this case is a file named MHk6kyiq.Z6O and is saved in the user’s temp directory where it is eventually executed. 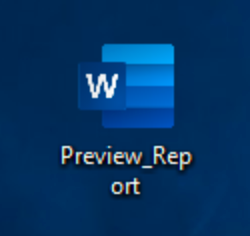 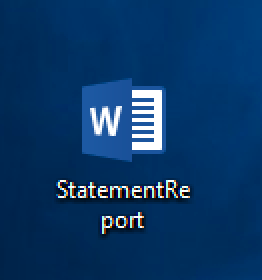 Using Cortex XDR and AutoFocus, we observed that once the files were executed by the victim, they would then retrieve the corresponding Trickbot payload from a first stage C2 server. Analyzing these domains indicate that they are owned by legitimate organizations which suggests the adversaries were able to compromise the legitimate servers and hijack them to be a part of their delivery infrastructure. This tactic further increases the chance of evasion by the adversary as it is unlikely these domains would be categorized as malicious and in some cases, may actually have legitimate business use cases for the targeted organizations. Table 2 below depicts the downloader and URL used for each Trickbot payload.

The two payloads, nfdsus12.exe and nfdusdarm.exe, were immediately identified as Trickbot by the AutoFocus threat intelligence service via the tagging system. AutoFocus tags are groupings of behaviors that are designed to immediately identify specific malware families, threat actors, campaigns, or exploits. These tags are developed and maintained by the Unit 42 research team and are continuously updated as threats evolve.

This specific variant appeared to be a newer version of Trickbot, using the file path %APPDATA%\cashcore to store its files and configurations. Once the payload is executed, it will spawn a child process (svchost.exe) in a suspended state, replace the memory with malicious code, and resume the process. The technique is known as process hollowing. From there, basic system information is collected, and it will attempt to communicate to its second-stage C2 infrastructure to retrieve additional modules.

Using Cortex XDR and its data analytics processing engine, we were able to validate this activity via the causality chain function as shown in Figure 6. 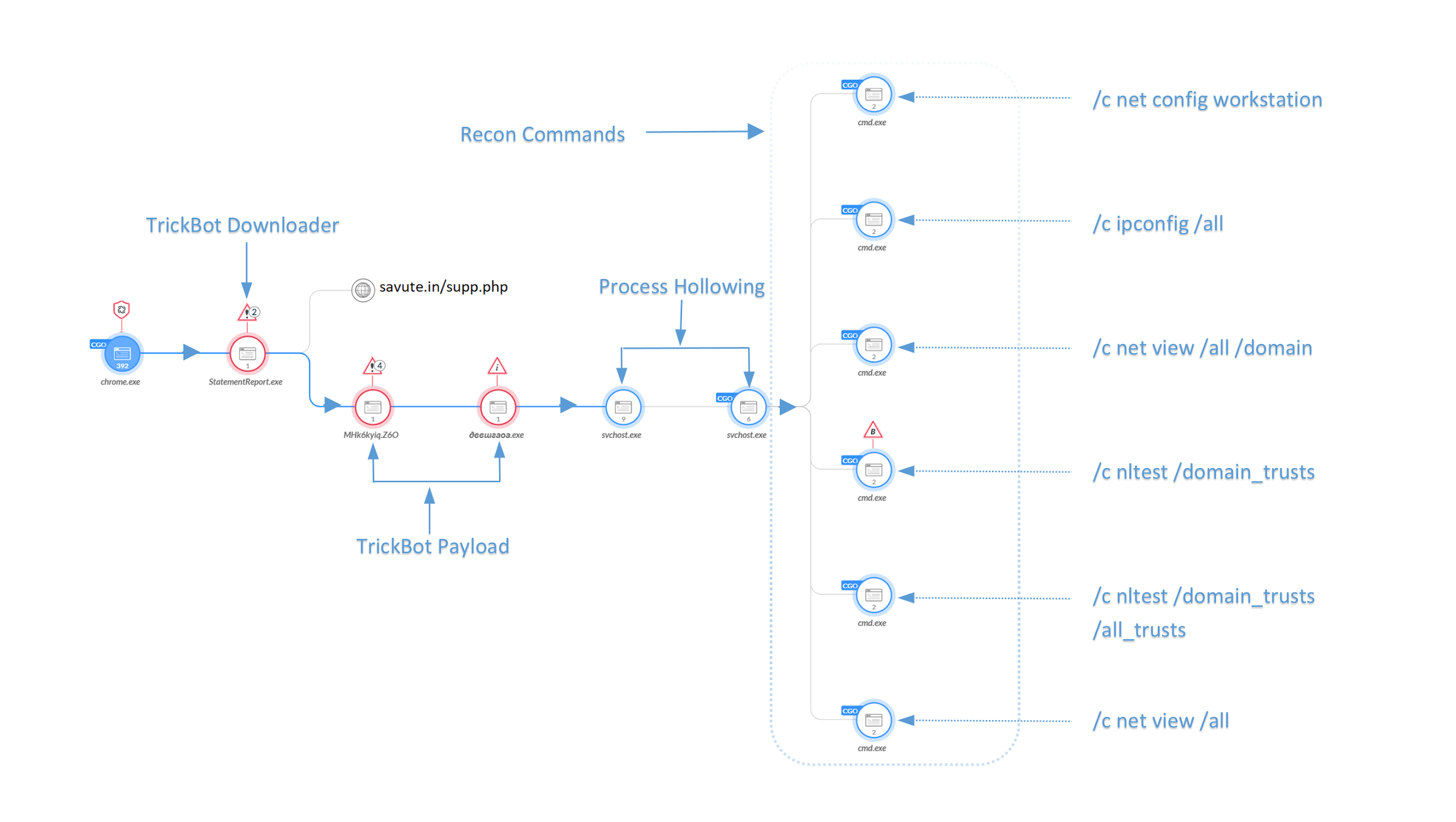 Using AutoFocus, we used the string supp.php within the URL as a pivot point to search for any other files that were delivered from that URL. An additional five samples were discovered that were also all tagged as Trickbot, making a total of seven samples. These samples used a different C2 delivery server, but behaviorally were the same. The two additional C2 servers also appeared to be legitimate domains which had likely been compromised and hijacked by the adversaries. Details about these samples can be seen in Table 3.

Executing another search in AutoFocus looking for the occurrence of the string cashcore within any File Activity revealed over 800 additional samples, also all tagged as Trickbot. These samples were all ingested into our WildFire malware analysis platform between November 4 – 22, 2019, suggesting that this specific variant was first found earlier this month and is currently still in use. These samples also encompassed a range of Trickbot related files, from the Trickbot payload itself as well as various Trickbot modules. All known indicators for this variant of Trickbot is available in the indicators section of this blog.

By using a combination of Cortex XDR and AutoFocus, Unit 42 researchers were able to rapidly identify and discover behaviors associated with a newer Trickbot campaign without significant manual analysis. In this campaign, we discovered the adversaries leveraging legitimate services such as SendGrid and GSuite in an effort to obfuscate malicious activity. With the wider adoption of various cloud services by most organizations, these types of tactics should be expected to occur with even more frequency as these are additional avenues that can be abused by an adversary to evade detection.

In this campaign, due to the abuse of legitimate cloud services, the detection and prevention of the initial delivery may have been more challenging than if the adversaries had used their own infrastructure. However, having a policy, such as preventing unknown executable files to be downloaded or executed on the endpoint, may help prevent these attacks from succeeding against businesses.