Researchers have discovered a new Android banking malware that targets Brazil’s Itaú Unibanco with the help of lookalike Google Play Store pages to carry out fraudulent financial transactions on victim devices without their knowledge.

“This application has a similar icon and name that could trick users into thinking it is a legitimate app related to Itaú Unibanco,” Cyble researchers said in a report published last week. “The [threat actor] has created a fake Google Play Store page and hosted the malware that targets Itaú Unibanco on it under the name ‘sincronizador.apk.'”

The tactic of leveraging fake app store pages as a lure is not new. In March, Meta (previously Facebook) disclosed details of an attack campaign that used its platform as part of a broader operation to spy on Uyghur Muslims using rogue third-party websites that used replica domains for popular news portals and websites designed to resemble third-party Android app stores, where attackers put fake keyboard, prayer, and dictionary apps that might appeal to the targets. 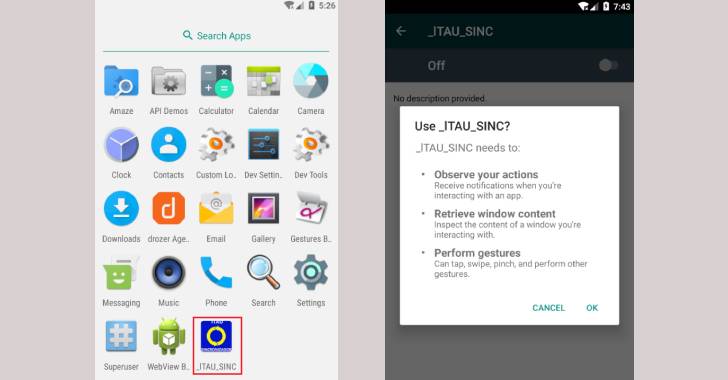 In the latest instance observed by Cyble, the fake URL not only impersonates the official Android app marketplace, but also hosts the malware-laced Itaú Unibanco application, in addition to claiming that the app has had 1,895,897 downloads.

Users who install and launch the imposter app from the supposed Google Play Store page are subsequently prompted to enable accessibility services as well as other intrusive permissions that allow the malware to access notifications, retrieve window content, and perform tap and swipe gestures.

The goal of the trojan, per the researchers, is to perform fraudulent financial transactions on the legitimate Itaú Unibanco application by tampering with the user’s input fields, joining a long list of banking malware that abuse the accessibility API. Google, for its part, has begun imposing new limitations to restrict the use of such permissions that allow apps to capture sensitive information from Android devices.

This is far from the first time the Sao Paulo-based financial services company has come under the radar of financially-motivated threat groups. Earlier this April, ESET revealed a new banking trojan dubbed Janeleiro that was observed striking corporate users in Brazil at least since 2019 across various sectors such as engineering, healthcare, retail, manufacturing, finance, transportation, and government.

“Users should install applications only after verifying their authenticity and install them exclusively from the official Google Play Store and other trusted portals to avoid such attacks.”